This custom bamboo fence seals off the garden from the outside world. Patty Myrick. 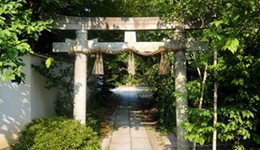 Torii gates are traditionally used at the entrance to Shinto shrines. Stéfan.

To create a true Japanese retreat, the garden must be sealed off from the outside world. Enclosing a garden is essential to creating a tranquil environment suited for contemplation. Fences, rock walls or manicured hedges can be used to enclose a garden.

Bamboo fencing is a great option for creating an enclosure with traditional Japanese style. Bamboo is a frequently used material in Japanese garden design because it is attractive and eco-friendly. You can build a bamboo fence yourself or purchase pre made bamboo fence panels. Bamboo fence panels come in a variety of styles. Some feature open designs, through which the scenery beyond can be seen.

Having an enclosed garden calls for a welcoming entrance. This can be easily accomplished with a gate, arbor, or a simple opening flanked by potted bonsai trees. Gates are a dominate feature of Japanese gardens. Torii gates are especially popular in Japan. Originally these gates were used to mark the entrance to a Shinto Shrine. Torii gates represent the transition from the common world into a sacred space.