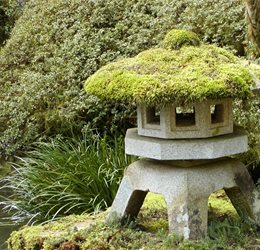 A stone lantern is an instantly recognizable characteristic of a Japanese garden. Photo used under Creative Commons from skyehopper. 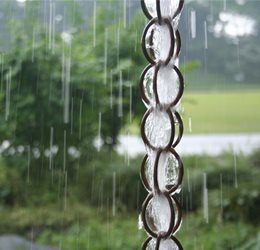 A rain chain is the Japanese version of a gutter downspout. Photo used under Creative Commons from contraption.

The first, and most important, is a stone lantern. There are many different styles of Japanese garden lanterns, ranging from informal to formal. There are also many different sizes of lanterns available, ranging from about a foot to more than four feet tall. Take the formality and size of your garden space into consideration when selecting and placing a Japanese lantern. Lanterns are often placed on a flat stone next to a pond or water basin.

Many Asian style gardens also feature a statue made of weathered stone or aged bronze. Often statues depict a religious figure, such as Buddha. However, they can also be animals or abstract forms.

Another common accessory for Japanese gardens is a rain chain. Rain chains are a decorative replacement for traditional gutter downspouts, which provide a wonderful water feature effect. They attach directly to existing gutters and make it possible to collect rain water in a basin. The water can then be reused in your garden. For many years, the Japanese have collected rainwater from their roofs using rain chains. Rain chains are often incorporated into the exterior design of Japanese temples.

The final décor elements to consider for a Japanese garden are wind chimes or a gong. You may want to search for such items on eBay or Craigslist.