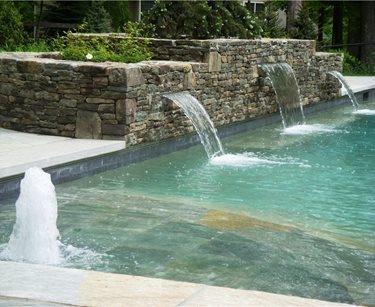 This large backyard pool, for a family with two young children, successfully combined the needs of the parents for a sophisticated environment for entertaining with child-friendly features that provide fun in the sun while ensuring safety. For the adults, a 14-foot-diameter spa was built inside the pool, allowing the entire pool to be enclosed by an automatic safety cover when not in use. For the children, a small sun shelf and play jet were built into the pool entry. Three waterfalls cascade from a stone planter wall over a built-in bench the length of the pool for the children to sit under. 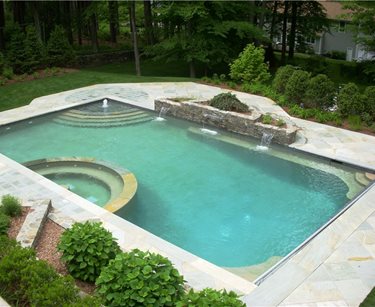 An aerial shot of the pool and spa. "I think we provided a fun, sophisticated area for both the adults and children. The spa is for all ages, especially the adults. The play jet and bench under the waterfalls are especially fun for the kids," says landscape architect Bill Einhorn of LDAW Landscape Architecture, Carmel, N.Y. 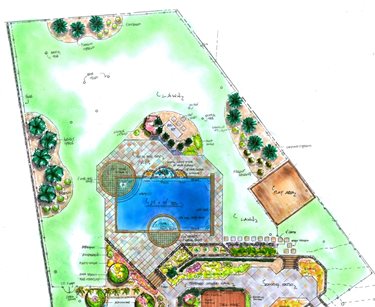 Design tip:
Use geometrical contrast to provide interest. "Although the design of the pool had to be rectilinear for the safety cover, we incorporated several circles that began within the pool and extended into the surrounding decking as to soften the rectangle," says Einhorn. 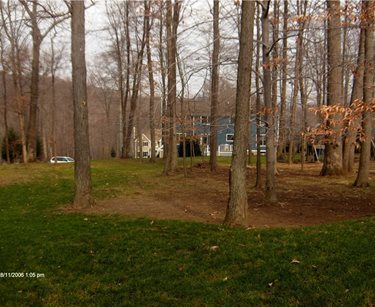 The yard before pool installation. The pool site was on the north side of the residence and had many trees that caused it to be very shady. "After we removed the trees, the space became much sunnier so we were able to plant buddleia (butterfly bush) in lieu of viburnums and fairy roses instead of ligularia," says Einhorn.

Design tip:
Be discriminating when removing trees. You want to create an environment conducive to sunbathing, while still providing some shade and structural interest. "Certain trees were desirable, so we made sure to design around them when possible," says Einhorn. 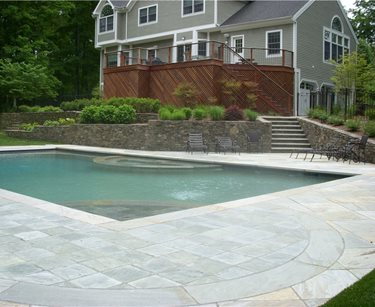 A view of the pool looking toward the house. Norwegian buff quartzite was used as the pool decking, a beautiful natural stone that doesn't absorb much heat and is cooler under bare feet. The large 2x2-foot stones are set in a 45-degree pattern that can be seen from several levels. 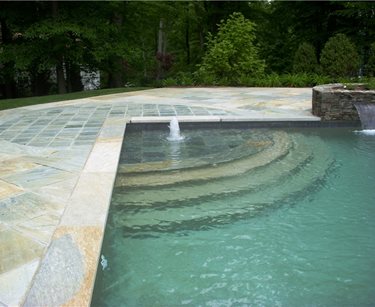 Smaller 1x1-foot quartzite stone in an aqua color was used to form circular patterns inside the pool and extending into the decking. "By doing so, I feel that we stretched the pool from a mere rectangle, as the spa and entry steps are now circles when the pool is viewed," says Einhorn. 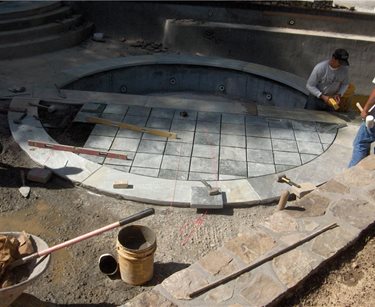 The circular coping for the spa is being installed. The spa was built within the pool so it could be covered by an automatic safety cover.

Design tip:
Install features that make the pool less costly to maintain and operate. "We incorporated energy-saving variable-speed pumps for all of the hydraulics. A chlorine generator was installed to save on pool chemical usage," says Einhorn.

The pool is enhanced by a trio of sheer-descent falls and a play jet at the entry steps into the pool. The waterfalls cascade over a built-in bench the length of the pool for the children to sit under.

Design tip:
Set the mood with colored lighting. The play jet, waterfalls, and pool lights are illuminated at night with LED color-changing fixtures. 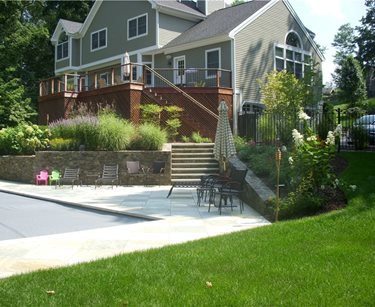 The homeowners wanted a new wood deck (shown in the background) with storage space below for furniture. Two stairways were incorporated into the design so people can access both sides of the property from the deck. A 5-foot retaining wall, built of Pennsylvania fieldstone, corrected a steep slope from the house to the pool site. 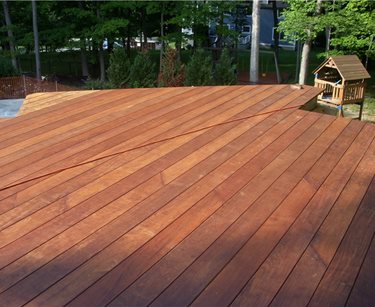 The wood used for the deck was ipe lumber, a beautiful reddish-brown South American hardwood similar to teak in appearance.

Design tip:
Hide the deck screws. On this project, the wood was pre-grooved and connected using hidden deck fasteners from Eb-Ty, which join the boards from the inside edges so no screws are visible in the deck surface. 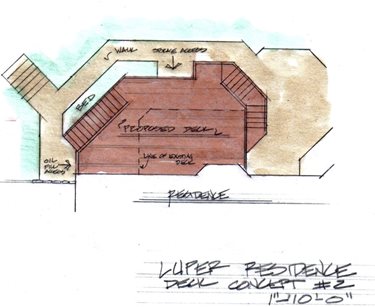 Plan view of the deck. 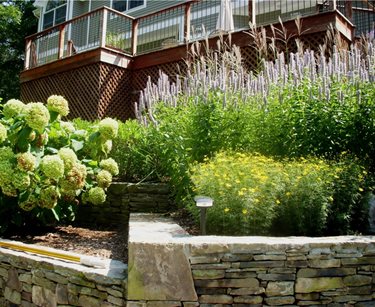 The retaining wall contains a perennial garden composed of Annabelle hydrangeas, agastachae, blue hyssop, and Moonbeam coreopsis. The tall Zebra grass in the back adds height and seasonal interest. Nandina was used in confined areas to soften the latticework around the new deck.

Design tip:
Choose plant combinations that will look good as the seasons change. This garden bed is designed to provide color and structural interest from May through October. 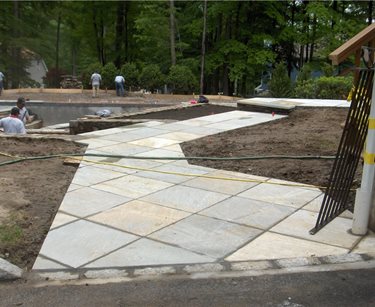 A stone walkway leading from the driveway to the pool uses the same Norwegian buff quartzite used to pave the pool deck.

Submit your project to LandscapingNetwork.com