How to Stamp Concrete

An overview of the concrete stamping process Sarah Hutchinson 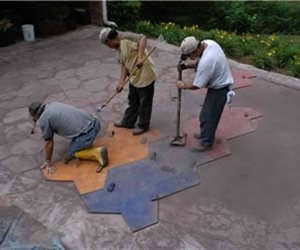 Installers stand on one stamp while placing the next row.

Concrete stamping work is typically done on new concrete. A fresh slab is formed and poured and a stamping crew comes in shortly after to add texture. The following is a step-by-step overview of the stamping process:

All-in-all the process of stamped concrete takes a few weeks, including sealing. However, the bulk of the work is done in just a few days (forming, pouring and stamping). Make sure to ask your contractor how long you need to wait before using your new patio, driveway or walkway, this can vary according to weather and other factors.

Depending on the size of the job and the detail required, you can expect to have anywhere from as few as three installers to more than eight working on your concrete. Typically, more installers are better, because they can work quicker and ensure they are stamping at the optimum time. You may want to ask the contractor you are considering how many people are on his crew.