How & When to Fertilize Your Lawn 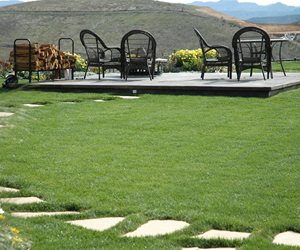 Most homeowners think about fertilizing as something you do to “green up” the turf. However, by the time your lawn is looking pale and unhealthy, it is already more susceptible to disease, weeds, and other issues. Lawn care professionals recommend fertilizing your lawn or doing other chemical lawn care tasks about seven times per year for the best results. Learn more about what to do to keep your lawn looking its best.

January/ February
Start your lawn off right by giving a light dose of fertilizer including nitrogen, phosphorus, and potassium. In addition, early spring is the time to do your first application of pre-emergent herbicide. “The pre-emergent prevents weeds like crabgrass and summer-annual broadleaf weeds,” says Brian Beane of Nature’s Select in Winston Salem, NC. “It prevents a seed from putting out a root system, so they can’t sprout.”

March/ April
Though your first dose of lawn fertilizer in spring will be very light, in March or April, you can use a more generous dose of fertilizer. In addition, it’s a good idea to do a second application of pre-emergent herbicide. “Pre-emergent herbicide is most effective as a split application,” says Beane. “Light and water break it down, so if you only do a single application, it may not last through the entire growing season.”

May/ June
In early summer, use a light dose of slow-release fertilizer including micronutrients like iron, copper, boron, and magnesium. Beane uses a custom-blended mix of humates, seaweed, fish, and blue-green algae to cover the micronutrient spectrum. “We use some synthetics to push nitrogen, but it’s mostly organic at this time of year,” says Beane.

Periodic spot treatments
In summer, it’s important to keep on top of the weeds. You can pull them out by hand or using a standing weeder such as Grandpa’s Weeder, or you can use a spot treatment of post-emergent herbicide by spraying only where you see broadleaf weeds such as dandelions. When using herbicides, use caution around children, pets, waterways, and wildlife such as birds and frogs.

July/ August
In late summer, you have two choices. If your lawn seems to need additional nutrients, you can apply a balanced slow-release fertilizer at this time, but for most lawns, Beane suggests just applying lime. Turfgrass prefers growing in soil with a pH of 6.5 to 7, which is more alkaline than the average garden soil. Any kind of horticultural line is effective at adjusting the pH, but Beane particularly recommends a product called Solu-Cal.

September/ October
The first application of fall fertilizer has a high phosphorus content, such as an 18-24-12. “Phosphorus is for root growth and seed germination, and we apply this fertilizer at the same time as aerating and overseeding,” says Beane. The fertilizer blend ensures the lawn recovers well from aeration and that the new lawn seed sprouts effectively.

October/ November
“In late fall, we use a granular fall fertilizer higher in nitrogen and phosphorus,” says Beane.

December/ January
The last fertilizer treatment of the year is the winterizer blend. While most winterizer fertilizers contain higher amounts of phosphorus and potassium than nitrogen, this type of program is only effective on warm-season grasses such as Bermudagrass and zoysiagrass. On cool-season grasses such as bluegrass, fescue, or rye, nitrogen is still the most important nutrient for winter. Beane recommends choosing a fertilizer which has a nitrogen source of ammonium nitrate rather than urea. Urea requires the microbes in the soil to help break it down, and during the colder months, soil microbes are much less active.

What do fertilizer numbers mean?

On the front of every bag of fertilizer, the macronutrient levels are listed as a series of three numbers, for example 20-5-10. Those numbers stand for nitrogen, phosphorus, and potassium (abbreviated N-P-K), which are the three primary nutrients lawns need to succeed.

Nitrogen
The first number on the fertilizer bag indicates nitrogen. “Nitrogen encourages leafy green growth, stems, and branches,” says Beane. If you need to “green up” your lawn, your fertilizer should include nitrogen.

Fast-acting, high-nitrogen fertilizers will rapidly boost growth, resulting in softer leaf tissue that is more susceptible to insect and disease damage. Slow-release fertilizers are coated to regulate the release of fertilizer over an extended time period, just like time release medicine capsules. They cost more than fast-acting fertilizers, but they are much better for your lawnscape and they will save you money on water and mowing.

Potassium
Potassium is the third number listed on the fertilizer bag, and is involved in nutrient transport, root growth, and disease-resistance. It also helps the plant use nitrogen more effectively.

There are both synthetic and organic sources available for all of these important macronutrients for your lawn. 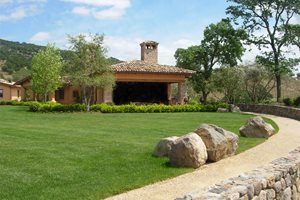 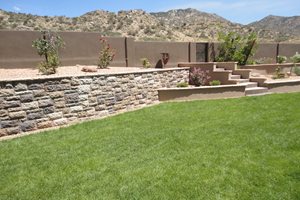