Natural stone is among the most long lasting and beautiful additions to a landscape. It's also the most unpredictable. No matter how well your designer delineates boulders on the plan, the actual rock used may not resemble that shape at all. That's because every boulder is unique, which dictates their final selection and placement be done in the field. Drawings are only a suggestion. The real talent for fine rock work can only be done by a designer or contractor with a lot of field experience.

Due to the cost of obtaining stone for the landscape, it's vital that each piece is used to its maximum advantage. There are six factors that influence the visual appeal and practicality of using landscape boulders, and ways they integrate into the site. These will help you determine whether using boulders in the landscape is a cost effective option for you, particularly if you live in a region where rock is rare or absent altogether.

There are hundreds of different types of stone in America and as many types of building materials. The right choice must work properly with both the details of your house and your landscape. The most commonly found boulders for landscaping come from water courses which makes them rounded, grey and offer little detailed interest. In comparison, an iron stained boulder with patches of lichens and moss colonies suggest it's been in the new location a long time. Where rock or masonry is used for on-site construction, try to maintain the same local look and feel with imported boulders in order to present a more cohesive design.

See examples of boulders being used in landscapes across the country and get ideas for landscaping with boulders in your own yard or garden.

Rocks are incredibly heavy. The cost is not for the rock itself, but for hauling it from the source to the new homesite. Obviously a local source will be far less expensive compared to long distance hauling which makes this low cost product exorbitant to buy. Small rock delivery companies in your area also maintain the equipment and experience to move and set your boulders too, which can save even more money.

If natural rock is already present at or around your homesite, bringing in a contrasting colored boulder is not advisable. Not only will it fail to look natural, the difference will be vaguely disturbing. Boulders should resemble what's there so that the new and existing blend together seamlessly.

Factor 3: Keep it in scale

The scale of the immediate space, and that of the site overall contribute to the proper sized boulder for the job. This is where a professional's field experience really comes in handy. The most common error is using undersized boulders because the weight of larger ones makes them expensive to deliver and place. This is false economy. In the long run, if the scale is wrong, the rock fails to show your designer's efforts to their best advantage. Where large boulders aren't possible use a multitude of modestly sized ones that can be arranged in a creative way.

Swimming pool contractors who build rock waterfalls know better than anyone what it takes to move boulders into the backyard of an existing home They're aware of the experimentation required to reposition boulders for the perfect look, and that takes manpower. The weight of boulders is always underestimated by the homeowner, and sometimes by inexperienced designers too. It's enough to cause serious cost overruns. There's also a risk to paving, vehicles and structures if these heavy objects are not handled safely. For this reason make sure your contractor is highly experienced and well insured for this kind of large rock work before turning over the project to her.

It is rare to find just one boulder all by itself in nature. They tend to exist in groups of varying shapes and sizes linked by the same parent material. This is where the rules of the Japanese garden come into play to help your contractor create successful constellations of boulders that resemble natural rock outcroppings. A boulder worked into a group of smaller sized "helping stones" always results in a more beautiful composition.

Boulders don't sit on top of the ground - they are planted into it. Each boulder will have one aspect that is most attractive, which is often discovered after one studies it for awhile. For this reason, expect your contractor to take her time with this. The stone's face should be positioned for high visibility. The remainder gets planted into the ground to anchor it both physically and visually.

The way boulders and their helping stones are arranged can create ideal planting opportunities just as they occur in nature. Plants grow at the edges of boulders for protection from the elements and to access moisture sequestered beneath the stone in dry seasons. This is an ideal opportunity to integrate long lived perennials or to add a specimen shrub such as twisted Harry Lauder's walking stick to visually anchor your stone. While rock is the universal element world wide, it is the plants your designer uses that projects the style you desire.

Nesting a boulder is a technique used in Japanese gardens, but it's also ideal for wild gardens. The goal is to plant the stone so it appears to rise up from within the vegetation. Nesting is a good way to make stones fit in around rock waterfalls and at patio edges where the base of the stone may be disfigured by mortar. It's also a problem solver for gaps or to disguise utilities, foundations and irrigation heads.

Over the centuries Japanese garden masters created a well defined art of stone arrangement. It is based on five fundamental stone shapes that may be achieved directly, or a stone may be buried or positioned to achieve the shape. Among these primary stones are smaller "helping" stones that may be added to create a more harmonious composition. Knowledge of these fundamentals allows a skilled contractor to see each stone as an element in the design and thereby better understand their relationships to one another. A balanced composition can be created by using all five shapes as its foundation.

Tall vertical - This stone is taller than it is wide. It's usually used on the taller half of a waterfall or as the central stone in a composition. Consider this the hinge of any composition upon which many other stones turn.

Low vertical- This stone is wider than it is tall. It is similar to tall vertical but is much wider relative to the height. This is a massive stone often used as a companion for tall vertical stones so they don't stand like a monolith.

Arching - This oddly shaped stone overhangs on right or left. It can also be known as a thrusting stone. It is slightly lower than the low vertical stone. It is used to give strength and stability to vital points of the garden such as the corner of a stone bridge. To achieve this a stone can be planted at an angle to make a moderate arch more prominent.

Reclining - This boulder will resemble the shape of a reclining animal with the head on one end higher and narrower than the hips on the opposite end. It's often referred to as an ox stone due to the strength it infers. Masters use this diagonal top line to draw the eye to another element close by in the garden, almost as though it is a pointer.

Flat - This easy to identify stone is less than a foot tall, but it may be unlimited in length and width. Above all it must have a flat top surface. These are used in front of a composition of boulders, at water's edge, as a bridge and as walks and stepping stones. 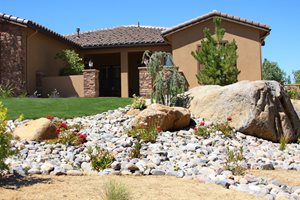 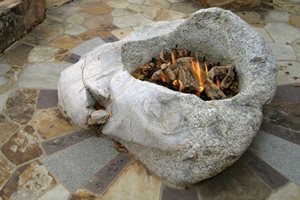 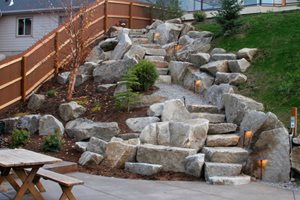