Ventura Landscaping IdeasBrowse photos and get Ideas for the Ventura

Backyard Revitalized After the Loss of an Ancient Oak

Often, it’s the large, grand trees on a property that influence a landscape design remodel. But what do you do when a stately specimen that should be a focal point is dead and deteriorating? The removal of a tree like this can leave an awkward gap in the landscape. Such was the case for homeowners in Thousand Oaks, California, a location where oaks are protected from being removed or disturbed. Originally the home, as well as its landscaping, had been built around multiple existing oaks, but when one along the property-line died and was removed, it left a large hole and an open space against the side of the home.

While the loss of such a majestic tree was upsetting, it opened a new opportunity to create an outdoor living space. “Previously, nothing could be built here because of the protected oak, but I suggested reclaiming this space with a step-down living area and outdoor fireplace,” says Aaron Blubaugh of Lifescape Designs. To solve the problem, Blubaugh created a design that would encourage family interaction and restore privacy between neighbors.

The new fireplace commands the space where the oak used to stand and an attached pergola with open beam woodwork acts as a ceiling for the new outdoor room. This design required extensive engineering to utilize an existing retaining wall to support the sidewalk while a lengthy grade beam carries the weight of the massive fireplace and pergola. A naturalistic creek meanders behind the fireplace and plants soften the area along the property-line. A set of French doors opens right into the new space, connecting it seamlessly with the indoors.

The loss of the oak motivated the homeowners to evaluate not only the side yard, but their entire property. With five children, four of them grown and one still at home, they wanted areas within their yard that would suit different age-groups and moods. Blubaugh took advantage of the elevation changes present on the property and used them to establish outdoor rooms. Working around an existing swimming pool and taking care not to infringe upon other mature trees, Lifescape Designs added flagstone borders around the patio, a stone stairway, new lawn and numerous plantings. They also fixed the pool, which according to Blubaugh was a remodeling job gone wrong. “The waterfall was a lump of concrete that resembled melted ice cream,” he says. New faux rock work was added along with an open-flume waterslide that the family’s youngest son enjoys. Now when the family is over, some gather by the fireplace, while others hang out on the deck, swim in the pool, or play on the lawn. This layout works very well for large gatherings because people can split into smaller groups.

Unlike most California homeowners who are drawn to Mediterranean designs, this couple requested that their new landscaping have an East Coast style. “The homes Tudor architecture as well as the owners’ roots in the East led them to choose a traditional landscape,” explains Blubaugh. The materials and plants used were selected to bring to mind those that you would see in Cape Cod or Nantucket. Specifically, the ledgestone used on the fireplace was selected for its coloring which is similar to that of stone found in New England. "Roses, hydrangeas, lilacs, forsythia, and heuchera give it the East Coast style with accents of pittosporum, flax and leopard plant thrown in to spice things up," says Blubaugh.

One of the most challenging aspects of this project was access. “Access to the backyard was narrow so we couldn’t bring in machines or cranes,” Blubaugh says. Everything was brought in and put in place using manpower and ingenuity. This proved to be most challenging when working on the stone steps that lead down to the lower portion of the yard where the lawn is. Each stone slab weighs hundreds of pounds and took multiple men to carry, place and arrange.

This family’s backyard is the perfect example of the old adage, ‘when one door closes another one opens.’ The loss of the mighty oak allowed a new outdoor living space to be created and serve as a gathering place for the family. Blubaugh describes it this way, “An injured space with no discernible logic has been repurposed for a noble end.” 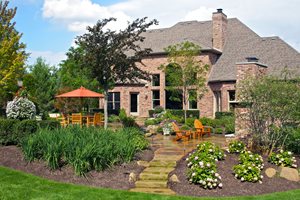 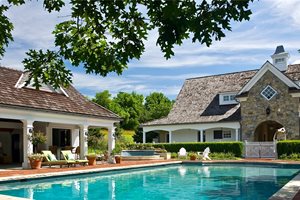