At one time, water conservation was strictly an issue facing the dry western states; however, it is now a more widespread challenge—whether related to drought or inadequate delivery infrastructure. With efforts to live green and greater sensitivity to water consumption, dry landscaping strategies are in demand everywhere.

The term xeriscape describes a landscape that demands little water. It is composed of naturally drought-resistant species from North America and dry climates around the world. In the dry western states, this style of landscape also supports exotics from South Africa, the Middle East and Australia. These plants are naturally adapted to the same long dry season as most western natives making them compatible in the garden. Because of water concerns, many western homeowners are turning to lawn-free landscapes.

In the east, xeriscape is more challenging because it is too cold and moist for these dry climate species to survive there. Regular summer rainfall also precludes most Mediterranean species that compose the large percentage of the western plant palette. The strategy here is to utilize native plants that are already perfectly adapted to thrive on local rainfall. Once established, these ask for no extra water in summer or much care in winter because they have evolved to adapt locally. Other American natives, plus a few exotic species from other cold humid regions of the world, may do equally well here.

In terms of planting design, it is important to determine just how dry a landscape will be; this dictates how to combine plants with similar water demands. However, a nursery-grown plant will not take on the drought resistance of its wild counterpart for at least two years or more. Many plants that are drought resistant in their natural habitat can have a hard time adapting to conditions in the nursery. Their root system can't spread out as it should due to the constraints of a container. Therefore, these plants will require significant irrigation the first and possibly the second dry season to help roots travel deep enough to support the plant without irrigation. As it becomes more established, irrigation can be cut back or phased out entirely. This illustrates why early maintenance of a newly installed xeriscape is paramount to its success.

In the west, irrigation is essential. The underlying principal in the xeriscape is a low-pressure, drip irrigation system designed to deliver water to the root zone and nowhere else. Deep watering is vital to luring roots downward, venturing deep to find moisture when the surface soil is dry, and trains plants to root beyond their original pot-shaped root ball. After a while, the deep roots will be able to sustain the plant even if the drip system is phased out.

But more often, the drip system remains in place and is used to ensure the plant is sufficiently hydrated not just to survive, but to look good and bloom abundantly in your landscape. This is vital to those species which choose the driest time of year to become dormant, which is summer and fall in the West. Some become deciduous when summer dormant, while others partly so. With irrigation, the deciduous species may retain enough foliage to remain attractive during these seasons.

All this deep rooting is found in most western natives, particularly those from California. These species are often found on hillsides, cliff faces, and in sandy gravelly ground along dry washes. They have evolved to root very deeply to reach moisture during the dry season. If planted in heavy clay, this rooting may be stunted and the soil may not be able to absorb enough water to support plants. Therefore, the plant may fail to reach its optimal level of drought resistance. Proper soil conditions are important with xeriscapes because of the preferences of the plants adapted to drought.

A mulch is simply an organic or mineral material spread on top of the ground to make conditions more amenable for plants. Mulches help prevent moisture from evaporating from the surface of the soil and shade the soil so it doesn't heat up so much in the summer. It is also vital for preventing weed growth that can compete with landscape plants for limited water.

Mulch availability is different in each region with the most cost-effective choices originating close by. For example, the southwest has always relied on naturalistic fine gravels. In the Pacific Northwest, forest industry byproducts such as wood chips and ground bark are cost effective. In the south, pine needle mulch is standard.

Use this design sheet to help you create the perfect xeriscape landscape. You'll get ideas for color, décor, materials, plants and fabric. It is a great starting point for any water-wise landscaping project.

Don't assume that all xeriscapes look like a southwestern desert scene. Mediterranean species have long been used in European gardens, and these can lend a formal French style or a rural Tuscan feel while conserving water. Drought-resistant plants from Africa and Australia can be chameleons, lending character and color to virtually any theme or style. Conservation can be as easy as finding a drought-resistant alternative to a water-loving tree or shrub.

For anyone contemplating a xeriscape, researching local native species used for landscaping, plus the array of imported species from dry climates around the world, is key to your success. There is no better way to make your home environmentally green and create a model landscape for water conservation. 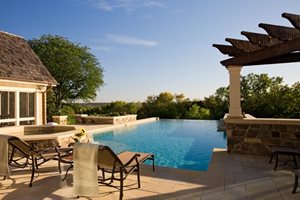 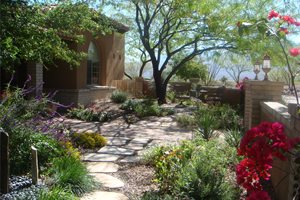 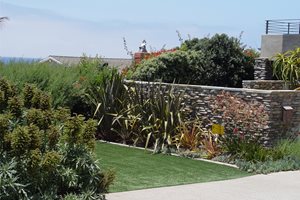